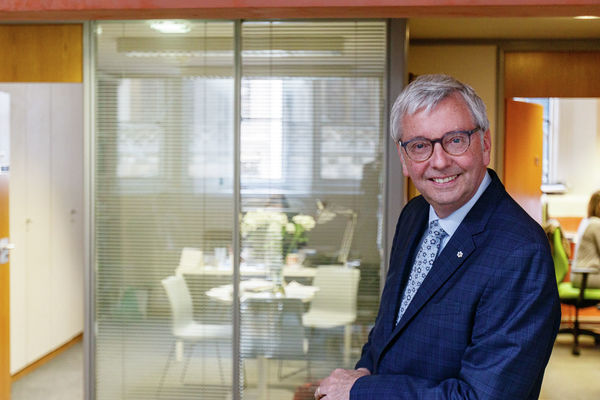 “It is a privilege to be at the head of such an important institution”: an exclusive interview with Vice-Chancellor Stephen Toope

Weeks after announcing that he will step down as Vice Chancellor in September 2022, Professor Stephen Toope sat down for an interview with University about her time in the role so far.

During his tenure, Vice-Chancellor Toope rose to the challenge of leading the University through a global pandemic, which presented challenges both in his personal life and in his role as head of one of the most prestigious universities in the world. In March 2020, Vice-Chancellor Toope made the decision to shift the university entirely to e-learning and integrated online exams, many of which have been completed with mitigation measures to reflect the range of factors that affected student learning throughout the year. Reflecting on how the pandemic will change the University in the future, Toope commented that she “has certainly reinforced this feeling that there is enormous pressure on students all the time.”

The Vice-Chancellor noted that even before the pandemic, there had been “real recognition” that “focusing on the mental health and well-being of students was something the university needed to do even more diligently than she hadn’t done it “. However, the pandemic has put these issues at the forefront of decision-making, he says.

“We just approved a new framework for student mental health and well-being which I really hope will link college efforts and, for more severe cases, connect us better with the NHS. This is the first time that we have had a framework that allows us to think holistically about student mental health and well-being and allows us to think about it at an earlier stage, not just when the going is right. a crisis. Will this have an impact on how we continue to evaluate and how we think about our teaching offer? I think it’s okay.

To see that we can use other mechanisms [to examine students] opened up avenues for reflection. When I talk to colleagues across the university, I now hear people who are excited about the idea of ​​researching other assessment methods.

It’s a journey we’re on. But there are many people across the University who are fundamentally committed to keeping the health and well-being of students at the forefront of our consideration. “

While the pandemic has placed vast barriers to international travel over the past two years, it hasn’t stopped Toope from considering deals between the University of Cambridge and foreign states.

Earlier this year, University revealed that a controversial £ 400million deal has been proposed between the University of Cambridge and the United Arab Emirates. Upon reflection however, Toope revealed to University that these plans have been stopped and that no meeting is taking place: “Everything is on hold for now, there is no conversation going on on these plans. “

“I have never met the Crown Prince and, in fact, I am not meeting anyone from the United Arab Emirates yet.”

The proposal was contested by many with ethical concerns regarding the UAE’s conduct regarding human rights violations, lack of rights for women and the LGBTQ + community, lack of freedom of expression and imprisonment. arbitrariness and torture of academics, including Matthew Hedges. They also referred to the imprisonment of Princess Latifa, the daughter of Sheikh Mohammed bin Rashid al Maktoum, the ruler of Dubai, and the kidnapping of his sister Princess Shamsa from the streets of Cambridge in 2000.

However, it was not these concerns that led the Vice Chancellor to reconsider the deal.

“We presented this whole set of questions to a panel at the University, as well as to the General Council,” the vice-chancellor explained, “to make sure they supported the start of the conversation. “

It is always a question of balance: it is of course necessary to evaluate the opportunity which presents itself to make a difference in the world and the risks to the reputation of a whole series of values ​​important for the University. The group looked at it step by step. We are aware of the risks of doing business with many states around the world, but we believe it is worth having the conversation. “

Finally, revelations about the The UAE’s use of Pegasus spyware led to the decision not to pursue the deal.

“The revelations led us to decide that now was not the right time to pursue these kinds of really ambitious plans with the UAE. There are relationships within the University at the departmental and individual academic level, but there are no conversations about a large project. “

When asked if he would consider continuing the deal at some point in the future, Toope said, “We’re going to have to bring this back to collective thinking. No one is going to rush into this. There will be no secret arrangements. I think we will need to have a solid discussion at some point in the future. Or, we can determine that it’s not worth increasing again. Honestly, I do not know.

The research we were trying to focus on was to try to upgrade the education system in the UAE which is really underperforming, to work on climate and energy transition issues and to work on a sharing of cultures. – Islamic cultures and Western cultures, to try to find ways to connect across cultures. Are these things important enough that we think we might be able to mitigate the risks? The answer is: I honestly don’t know.

At one year of his mandate, the vice-chancellor is confident to have undertaken everything he had set himself: “I feel that most of the things that interest me are well under way. In particular, the Vice-Chancellor applauded the progress made towards the goal of funding the Student Support Initiative. “We are already halfway to our goal of £ 500million. We have moved forward to launch the foundation year and will welcome the new cohort next year to the University. The initiative, which was announced in October 2018, includes three fundamental principles: financial support for undergraduates, new postgraduate scholarships and student life and well-being.

The University has long resisted criticism over access and participation, an area the Vice-Chancellor sought to address throughout his tenure. In 2018, the The Financial Times revealed that one in five Cambridge colleges admitted fewer than 10 Métis students over a five-year period. At the time, the University called for more support, claiming that nothing more could be done without the participation of parents and schools. Professor Toope applauded the efforts to correct this injustice, acknowledging that this year the University would “welcome a record number of black undergraduate students.”

“We have tripled the number in just over three years and it is a testament to these excellent students, but it is also a testament to the university intentionally reaching out and saying there is a place for you in Cambridge. “

Beyond opening up the university to talent from more diverse fields, Vice-Chancellor Toope affirmed the success of the Cambridge Zero Carbon campaign. In October of last year, University announced the announcement that the University would remove all direct and indirect investment in the fossil fuel industry from its £ 3.5 billion endowment fund by 2030. While some applauded the move, d Others, including representatives from Extinction Rebellion (XR) Cambridge, challenged the extension of the deadline. .

As the vice-chancellor prepares for his final year, he acknowledged the “huge support” from his colleagues. At times Professor Toope has come under harsh criticism from current colleagues and academics, accusing him of failing to protect academics’ freedom and exposing what they claim to be unnecessary political correctness, like the short-lived ‘Report + Support System’, which was phased out a week after its initial implementation in May this year. In response, Professor Toope asserts that his “views on free speech have been completely distorted, certainly in the press, or in parts of the press”.

Professor Toope denies the apparent split between progressive and conservative members of his team: “I think defining this as ‘awake against so-called defenders of tradition’ is a false dichotomy that I honestly don’t see as the University of Cambridge. I think the vast majority of colleagues want both – that it is an institution that fundamentally supports freedom of expression and one that wants to support healthy student relations among staff, good working practices and tolerant behavior.

“I can’t claim that some of the things that have been said in the press aren’t hurtful, but it makes it easier to take when you know there are a lot of people out there who are also very supportive.”

Following criticism, the vice-chancellor has received more than 300 messages of support since announcing his departure from his post next year. Here he stops: “It is a privilege to be at the head of an institution so important for the United Kingdom but also for the world. The Vice-Chancellor looks forward to the opportunity to spend more time with family and friends after his term ends.

So we depend almost entirely on advertising for fundraising and expect to have a few tough months and years ahead.

Despite this situation, we will be looking for inventive ways to serve our readership with digital content and of course in print!

Therefore, we ask our readers, if they wish, to donate from just £ 1 to help us cover our running costs. Thank you very much, we hope you can help us!